Once you start sending data to Lightstep Satellites, it is recommended practice to monitor their performance. The Satellites expose statsd metrics that can be sent to Prometheus, a popular open source systems monitoring and alerting toolkit.

In this tutorial, we will setup a Lightstep Satellite and Prometheus in a local Kubernetes cluster using Docker for Desktop on Mac.

We will run this example in in Kubernetes. Before proceeding make sure you have:

We will use this to run the satellite.

2. Create a ConfigMap for statsd

This will map the statsd metrics reporting from the satellite to a Prometheus friendly format.

3. Create a Deployment for the Satellite

In this deployment, we will run a sidecar container for the statsd-exporter which will listen to metrics emitted by the satellite and transform them using the ConfigMap above.

It’s important to note that in this configuration, each Satellite you run will have a statsd-exporter sidecar alongside to report its metrics.

The following example is used for testing, refer to the Satellite Configuration Parameters for more details on options available for the satellite.

4. Expose the Service for the satellite and statsd-exporter

Use one of our guides to report telemetry data to the satellite at localhost:8181

Go to localhost:9102/metrics and verify that lightstep_* metrics are showing up.

Now, we are ready to send these metrics to Prometheus.

In our test we are only running one Satellite, but in a production environment each satellite will be reporting individual metrics via a statsd-exporter sidecar. We can setup a ConfigMap to differentiate between the Satellites based on their node metadata.

We only need one Prometheus instance as it is capable of scraping multiple satellites.

The following ConfigMap assumes that Prometheus runs in the same cluster and namespace as the satellites. For more advanced configurations, refer to Prometheus docs.

Make sure to set the app label and metrics port name to the correct config so that Prometheus can discover the endpoints for scraping.

2. Setup a Deployment for Prometheus

We will also enable Prometheus to run a Web UI on port 9090 for testing.

3. Expose the Prometheus UI as a Service

Navigate to localhost:9090/targets to test that Prometheus has registered one satellite for scraping the metrics (multiple if you chose to run multiple replicas). This may take a few seconds.

Navigate to localhost:9090/graph and choose one of the lightstep_* metrics to graph. If you are running multiple replicas, you will observe an individual time series in the graph for each satellite. 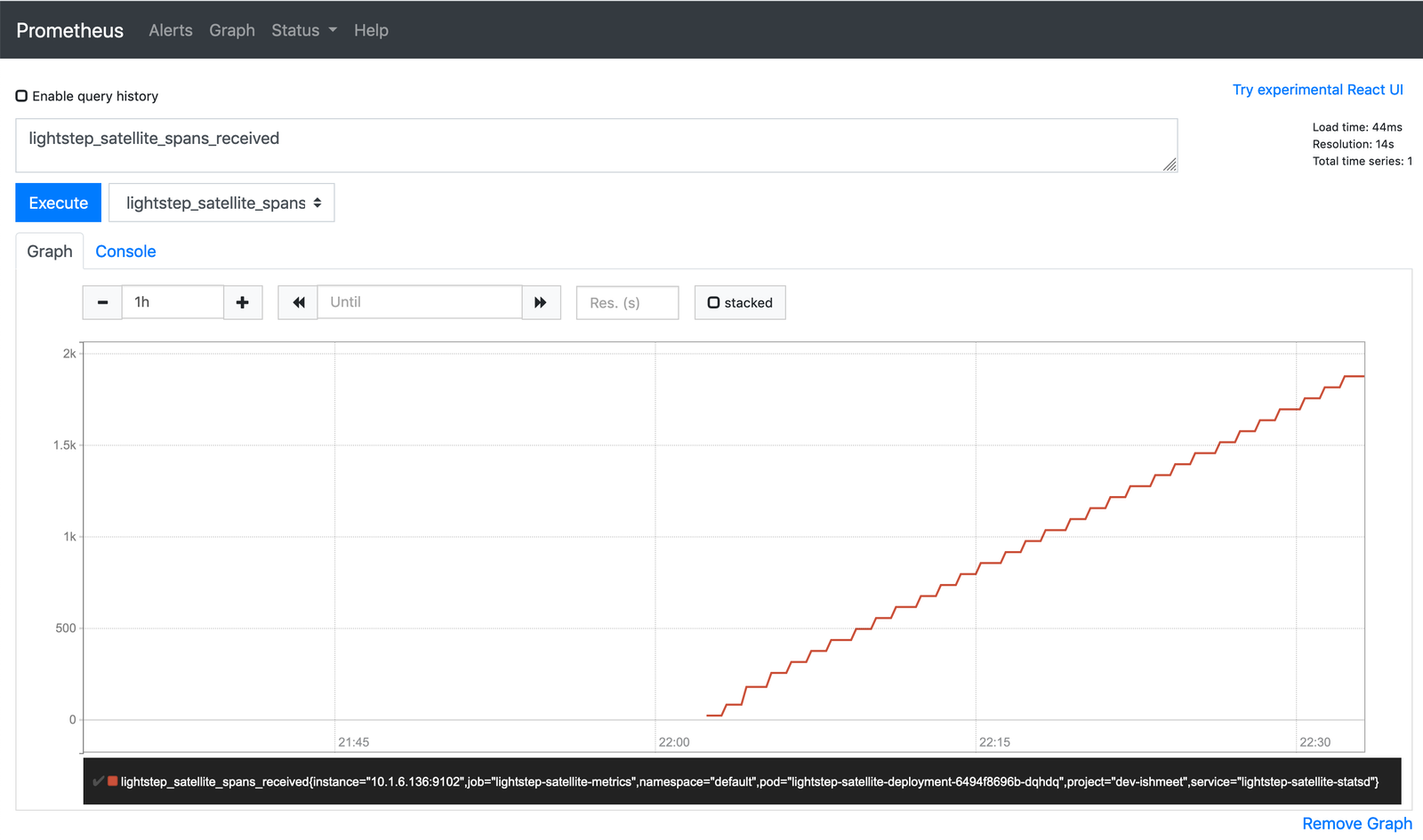 If you are an experienced Prometheus user, you may want to send the metrics to Grafana directly for visualization, aggregation, and further calculations and also set up monitors on the important metrics in Prometheus Alertmanager.