Metrics Root Cause Analysis
Robin Whitmore
On this page...

Once you’ve created charts in notebooks, dashboards, or alerts, you can use Change Intelligence to investigate what caused any deviations in those charts. For metric data, Change Intelligence looks at traces that include spans from key operations on the service that emitted the metric. For span data, it searches traces that match the chart’s query. In both cases, Change Intelligence surfaces the attributes that appeared in traces with performance issues occurring at the same time as the spike in the chart.

For metric charts, Change Intelligence looks for the service.name attribute (tag/label) in your metric data to determine the sending service. If you want to change that or add others, you need to register them.

You will get the most value out of Change Intelligence when you fully instrument your services for distributed tracing. Using a good amount of attributes ensures Change Intelligence can correlate deviations to spans in your trace data to find what caused the change.

Investigate a deviation from a chart or a dashboard

Work with the expanded view of Change Intelligence

You can change the time period for the chart, change the baseline and deviation time windows, and turn off/on deployment markers.

Use the time picker to select a different time period. Use the < > controls to move backwards and forwards through time. To help you explore data, the time picker saves your custom time ranges and shows them under Recently used.

Change Intelligence re-calculates to restrict analyses to that time period.

Change the baseline and deviation windows

Change either time period by grabbing the handles on the window and dragging. Or, drag a time window to move it.

You can also zoom in on a time period by clicking and dragging over the time period you want a closer look at. The dashboard or chart redraws to report on just the period you selected (expanded view only).

As you change the time period(s), Change Intelligence re-calculates to find the biggest changes in performance between the two time periods.

Turn deployment markers on or off (expanded view only)

Lightstep Observability can determine when deploys ocurred when you implement an attribute in your service instrumentation to hold versions of your service. When Lightstep finds that the value for that attribute has changed, it displays a deployment marker on the chart. Deployment markers can help you associate recent deployments with changes in performance.

By default, Change Intelligence displays the marker. To turn them off, click Display Settings.

You can share correlated attribute charts with anyone with a Lightstep Observability account, and they can see and work with Change Intelligence using the exact data that you used.

Add a correlation to a notebook

You can add an SLI chart for a correlated attribute to a notebook for when, during an investigation, you want to be able to run ad hoc queries, take notes, and save your analysis for use in postmortems or runbooks. Notebooks allow you to view metric and trace data from different places in Lightstep Observability together, in one place.

To add the latency SLI chart to a notebook from the panel view, click the Add to notebook icon. 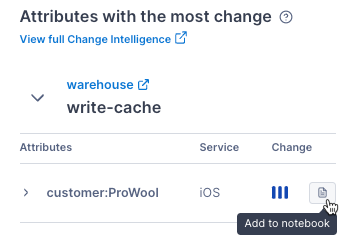 To add another chart, expand the row and click Add to notebook for that chart. 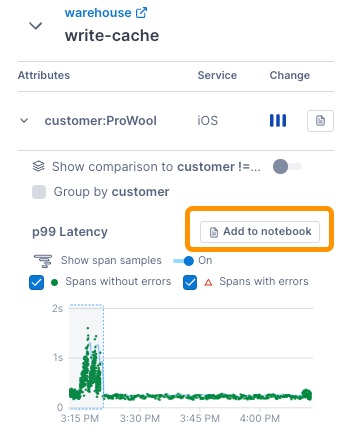 In the expanded view, click Add to notebook for the chart to be added.

Search to choose an existing notebook or create a new notebook.

When you add to a notebook, a chart is created querying on the attribute, service, and operation from the correlation. 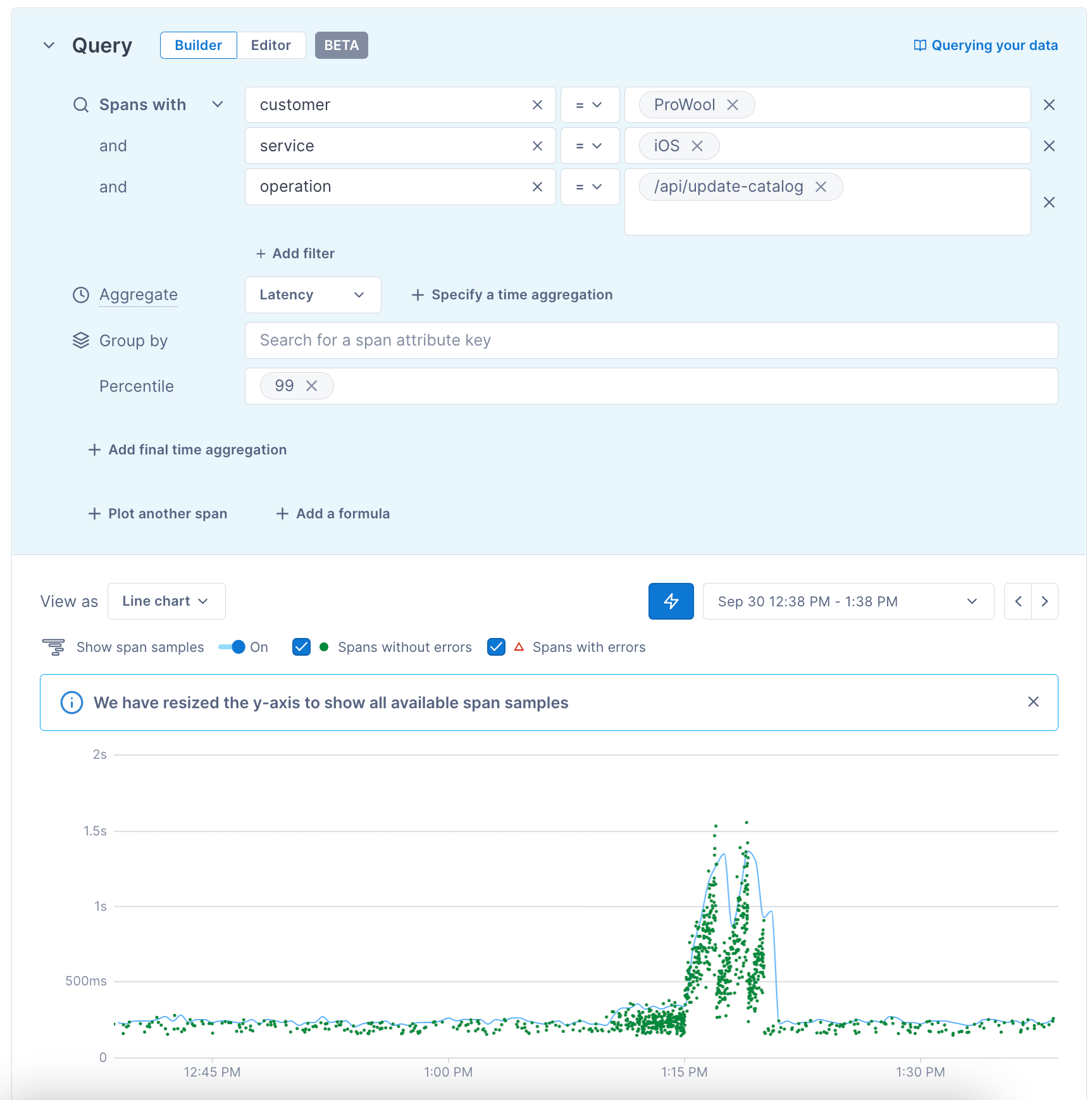 Use notebooks in your investigation

You can create notebooks for ad-hoc queries, post-mortems, runbooks, collaboration, or anytime you want to keep a record of an investigation.

Create alerts for your metric and span data. When triggered, alerts are sent to configured destinations.