Lightstep Observability ingests metrics from a number of sources as time series and saves them to a time series database. When you use Lightstep Observability to view that data, it transforms it into data points plotted on a chart. Different sources send different data. Some may roll up to a 60 second average. Others might report multiple individual points and timestamps, or send an array of points. Some may even aggregate the data before sending it. Lightstep Observability stores that data in form that’s sent and then when you make a query to that data, based on the metric kind and the time series operators chosen for the chart, it aligns the seconds to transform data uniformly. Once that happens, the aggregation method you select for the chart determines the values to display.

A time series is a sequence of measurements over a period of time. For example, if you recorded the temperature outside at every hour, the time series would be each of the values at every hour: 8:00 am - 55°, 9:00am - 57°, 10:00 am - 58°, and so on. Time series allow you to easily see changes over time when displayed as a chart.

Example:
Here’s an example of a time series for the http.request metric being reported by two agents (the first number in each array is a timestamp):

When displaying time series data, you may want the visualization of the data to be different depending on what you’re measuring. For example, if you’re measuring the temperature, you want to see the actual temperature at a particular point in time. Seeing just the change between the points in time would not be very helpful. A 5° between 50° and 55° is not a big deal, but it might be if it was between 95° and 100°. But if you were measuring HTTP requests to an endpoint, then you might only want to know about the change, or even the rate of change since the last point in time. Did the request rate go up or down? And by how much?

Because of these differences, Lightstep Observability supports gauges and two types of counters - deltas and cumulative.

Metrics must be labeled as their kind before they are ingested. If when first ingested a metric name doesn’t match the kind recorded, it will be rejected and an error will be sent back to the client. If you want to change a metric’s kind, contact Customer Success at support@lightstep.com.

Gauges represent an observed value at a specific point in time or over a specified range of time. Temperature readings are an example of a gauge metric. CPU usage is another example; you want to know exactly how much of an available resource is being used at a given point in time. Gauges are best when you don’t much care about the degree of change over time - you want the actual number at that time.

Deltas show how the values change from one reporting period (point on the graph) to the next. HTTP requests is an example of a delta metric. You want to see if requests are going up or down, and by how much.

Cumulative metrics add their value to the last value. They count the total number of things at a specific point in time, but as opposed to deltas, each value uses the same “start” timestamp to determine the value. An example of a cumulative metric is total web page hits. The value at each point in time increases from the last value, and you want to know how many of something you have accumulated at a given point in time.

Time series operators determine how a value is reported over time.

The latest operator can only be used with gauge-type metrics.

The delta operator computes the difference since the previous value. If Lightstep Observability ingests a time series array for a delta metric kind of [1,1,1,2,2,2,3,3] and the time series operator is set to delta, Lightstep Observability stores the value 15- the total amount that value changed since last reported. Deltas are useful when you want to know how much something has changed over a period of time. If you use delta for something like HTTP requests, you’d be able to see how the number of requests has changed at a particular point in time.

When using counter metrics (delta or cumulative), you can choose between displaying that metric as a delta or as a rate when you create your chart.

Alignment is the process of taking the metrics stored in the database and converting it into the data points shown on the chart by determining the granularity (the time interval between those points). How that alignment is determined is based on the time period currently being displayed and the time series operator applied to the metric.

Lightstep Observability displays 120 data points in every chart. It queries the database giving the number of seconds each data point represents and returns a “bucket” of time series aligned to those points. So if a chart is displaying the last hour, there will be 2 data points per minute, or one every 30 seconds. The timestamped values from the database that are closest to each 30 second interval are used for that data point.

The maximum interval is 45 seconds.

What exact value is displayed at that data point depends on the aggregation method you choose.

All this computation so far returns the time series as single values for the entire metric (for example, on a line chart, as a single line). You can use attributes on your metric data (also called tags or labels in some metric sources) to filter the query and restrict what gets displayed or to group the query by attribute values.

Metric data often uses attributes to annotate the data with descriptions that help in getting your data to tell a more exact story. For example, metrics might use the service attribute to show what service a metric was emitted from, or the customer attribute to show which customer made the request. You can use attributes from your metric data to filter your query (to explicitly include/exclude metrics with certain attribute/value pairs) and to break out a single line of data points into separate data points for each value of an attribute.

For a metric like HTTP requests, one chart probably isn’t going to be very helpful. You’d see large numbers and if there’s a troubling spike, probably wouldn’t be able to pinpoint where the issue is coming from or who it’s affecting. By using attributes to filter your query, you can create concise charts that include only the data that’s important for this chart.

When you filter a query, Lightstep Observability only retrieves data from the metric database that matches (includes) the attribute/value or that doesn’t match (exclude).

For example, as part of your service level agreements with your VIP accounts, you need to keep a close eye on performance for them. You might use the customer attribute create a chart for each VIP customer.

Like filtering, grouping gives you more insight into your data by allowing you to “split apart” the metrics into groups. When you choose to group by an attribute, Lightstep Observability creates separate data points (separate lines on a line chart or different color boxes on a bar chart) for each value of the attribute. Now you can get a sense of the distribution of the metric across the different attribute values.

Say you’ve added the filter service: iOS so that the query only returns HTTP requests from the iOS service. But seeing all requests made by service might not give you the details you need to find an issue. If you group by the customer attribute, then you can see how the service is performing for each customer.

Let’s look at an example metric query starting with the time series reported by the agent and finishing with a useful chart in Lightstep Observability. We’ll use requests, which is a delta metric kind.

Here are three time series flushed from two different agents for the requests metric, shown in a table. Both agents report every 30 seconds.

Lightstep Observability ingests these time series and stores them in the metric database. When you build a chart, the metric requests is now available to select in the query builder. 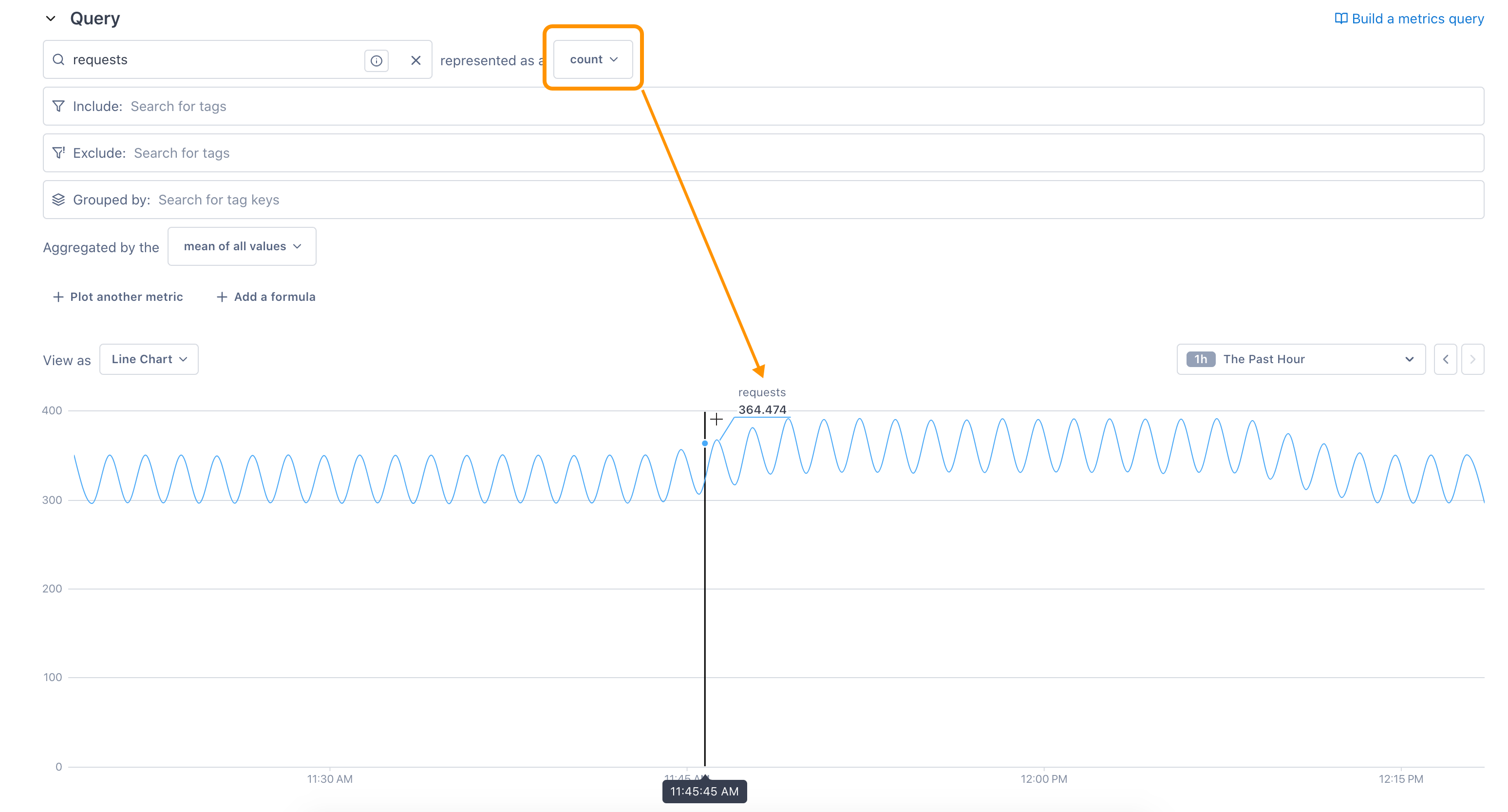 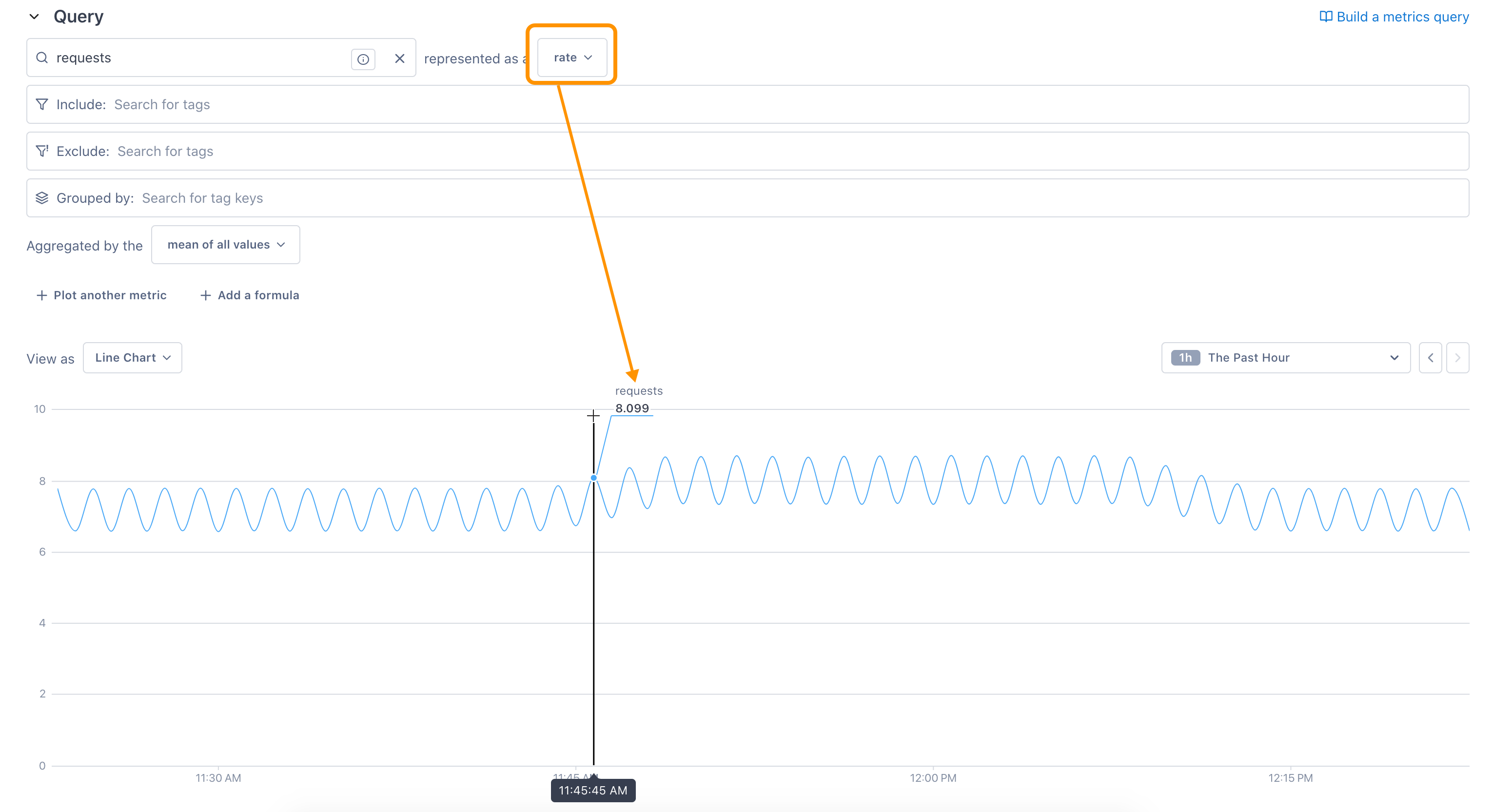 Let’s choose delta. Now Lightstep Observability knows to count the number of requests reported for each time series and next checks to see if any filters or groups have been applied.

Group the data by attribute values

Next, it needs to align the time series for each method to match the time being displayed in the chart.

Align time to the chart

Since the time is different from what is stored in the database, Lightstep Observability needs to align the time. The first time series in the database is:
[[now-15, 100], [now+15, 100]

Now it needs to determine the value to display at each data point for each method using the selected aggregation.

Let’s say we want the chart to display the maximum value at each time point.
We end up with the following data points:

Learn how to create dashboards that can display both your metric and span data.

Create alerts for your metric and span data. When triggered, alerts are sent to configured destinations.