Satellites Get Started
Robin Whitmore
On this page...

What is a Satellite?

Lightstep uses Satellites to collect 100% of the performance data that your tracing instrumentation generates. Satellites collect telemetry data generated by instrumented clients and servers, and then process and temporarily store that data during trace assembly. The Hypothesis Engine (the remote SaaS component) queries the Satellites, records aggregate information about the spans, directs the trace assembly process, and then stores traces durably, all for display in the Lightstep UI.

Typically during development, especially when instrumenting a single service, you only want to see traces from your service, rather than having to wait to deploy to see results. Lightstep’s Developer Mode includes a Satellite you run on your machine. Because this Satellite communicates only with your local code, you see only your traces, speeding up instrumentation, testing, and debugging.

Once several services are instrumented, you want to see how the instrumentation is working throughout your system. At this point, you can configure your tracers to communicate with Lightstep’s public shared Satellite pool. Not having to install and maintain on-premise Satellites accelerates the initial production of meaningful traces right away. However, you should only use the shared Satellite pool during development - production traffic must always be sent to on-premise Satellites for the following reasons:

For production environments, you want complete control over your Satellites. You can download, install, and tune Satellites to fit your exact needs. Satellites are straightforward to deploy using a Docker image, AWS AMI, or Debian package. 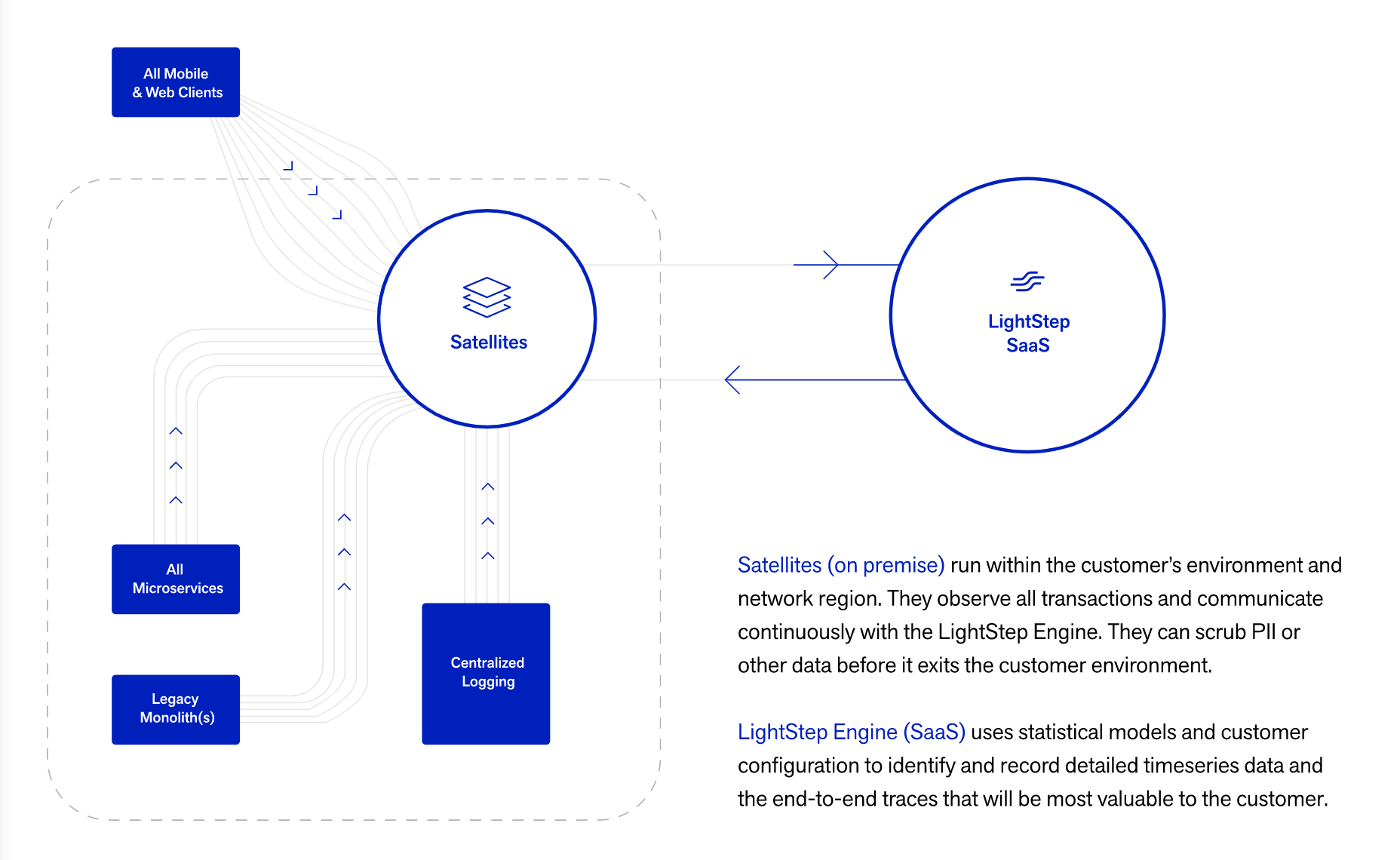 Each Satellite holds 100% of unsampled recent spans in a temporary buffer. When a Satellite receives spans from a client, it places them in that buffer, discarding older spans as newer spans arrive. The length of time between the newest and the oldest span currently held in that buffer is the recall or recall window. This window shows how far back into the past Lightstep can look to find spans while assembling a trace. For example, if the current recall is 5 minutes, then when an application error occurs, any spans reported in the last 5 minutes can be assembled as part of a trace for that error.

Satellite recall is mainly affected by the following factors:

Significant variance in recall figures across Satellites within a Satellite pool can be a symptom of load imbalance. Load imbalance can limit your ability to tune the recall window to the desired length, and indicates suboptimal resource usage, as the useful capacity of the overall pool is limited by the lower bound Satellites. See Load Balance Satellites for recommendations on tuning your Satellites.

Insufficient recall happens when your pool of on-premise Satellites is under-provisioned and is a key indicator that you should scale your pool by increasing the number of Satellites you are running and/or choosing machines with more memory.

Remember that insufficient recall does not equal insufficient trace retention. Satellite recall is only relevant to spans that have not yet been assembled as part of a trace. Once Lightstep assembles a trace, it retains all spans in that trace for as long as your Data Retention policy.

How Many Satellites Do I Need?

This depends on the rate at which spans are sent to the Satellites and the number and sizes of logs associated with those spans. Available memory is often the limiting resource. Lightstep recommends that the total amount of memory among all Satellite instances is at least as large as the memory required.

You can use this calculation to get started (it only considers spans, so more memory will likely be needed): memory_required = requests/second * spans/request * bytes/span * seconds_of_recall

To complete the calculation, determine the following about your system:

Based on this, multiplying values of the 2nd through 5th bullet points should produce the recommended total memory required across the satellite pool. This value will be in bytes. Satellites use most of their allocated memory for internal operation, leaving about one-quarter of the RAM for indexing spans. Because each 16 GB satellite will have around 4GB available for span indexing, divide the recommended total memory by 4e9 to get the total number of 16Gb satellites you should provision, to start with. As you start to receive data in Lightstep, you’ll be better able to tune and load balance

Lightstep recommends using machines with 2 CPU and 16 GB of memory each.

Note that tracer client libraries and Satellites will degrade gracefully if the pool is under-provisioned, so the only impact of making your pool too small is lower quality traces.

Find our recommendations for load balancing your Satellites here

Depending on your application and production environment, you may choose to set up several Satellite pools. You should set up at least one Satellite in each region where you run a backend, as this will limit cross-region traffic. You might also set up separate pools to isolate developer and production traffic.

Satellites use a Satellite key associated with your organization. Unlike your access token (which provides only the ability to report spans from your tracer), the Satellite key allows the Satellite to read a small amount of configuration associated with projects in your organization, and the current list of operations that appear on dashboards. Access to this data allows Satellites to compute aggregated statistics for these operations. These credentials don’t provide read access to any spans or traces.

Lightstep continuously publishes new Satellite versions to improve the quality of collection and reporting. We offer versions for Docker, AWS, and Debian. You receive notifications when a new version is available.

Using Public Satellites for Development and On-Premise for Production

You may decide to use public satellites for the development environment for convenience and use on-premise Satellites for production to ensure better performance and isolation from other organizations. You can do this by creating separate projects for each environment.

You can enforce a production project to only use on-premise Satellites from the Project Settings page.

To enforce on-premise Satellite use:

Lightstep Satellites are straightforward to deploy using a Docker image, AWS/AMI, or a Debian package.

Installation and configuration of Lightstep Satellites vary, depending on if you're installing to Docker, AWS/AMI, or Debian/Ubuntu, but all share the same configuration parameters. This topic describes each of these parameters

Having effective load balancing of your Lightstep Satellites is important to ensure a consistent and adjustable recall window for the Satellite pool and allow for efficient use of Satellite computing resources.